The definitive reference to cloud types and Cloud species is the ICAO Cloud Atlas which can be downloaded for free from this site:

There are a number of less detailed cloud type images on the internet.   For example 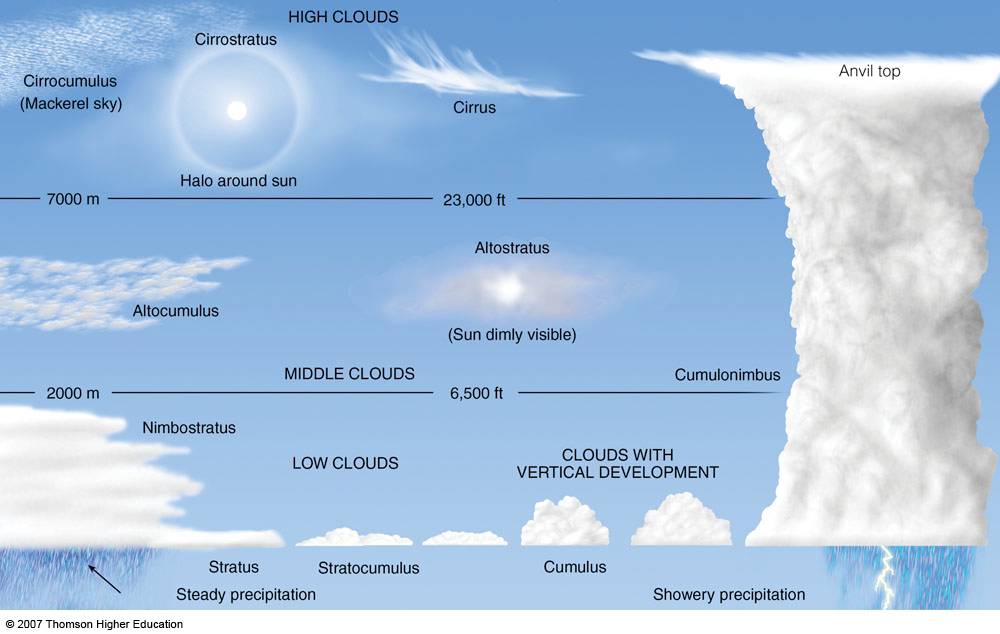 Current ceilometers have a range out to about 25,000 ft,  and other models with larger telescopes built in,.  can reach up to about 40000 ft.   For use in aviation,  at airports a range of 12,00 ft is considered adequate.

The phrase “eye-safe” is used below.

Class 1:   This class is eye-safe under all operating conditions.

Class 1M:  This class is safe for viewing directly with the naked eye, but may be hazardous to view with the aid of optical instruments. In general, the use of magnifying glasses increases the hazard from a widely-diverging beam (eg LEDs and bare laser diodes), and binoculars or telescopes increase the hazard from a wide, collimated beam   Radiation in classes 1 and 1M can be visible, invisible or both.

The beam from a ceilometer has a very low divergence,  which is mainly determined  by the finite size of the laser source and the ceilometer lens/mirror focal length,  but can also be effected by spherical aberration and diffraction effects in the optical path in the instrument.

A human observer looks at the sky and estimates the coverage in 8ths ,  0 being clear sky and 8 being overcast.   The human observer then estimates cloud height and applies these estimates of cover for each layer.    It is quite obvious that if there are no breaks in the sky,  any higher layers present cannot be estimated.    The human observer also suffers from the “packing” effect of an oblique line of sight , and usually tends to overestimate cover.

For each layer the human observer will give the condition FEW,  SCATTER,  BROKEN AND overcast.

A ceilometer can only “see” cloud above it,  so can only estimate the sky condition by analysing heights over a time period.

The Sky Condition Algorithm in the 8200-CHS  is based on that developed by the US National Weather Service and used in their automated surface observing system (ASOS) units and  guidelines published by the World Meteorological Organization.

A study by the Hughes STX Corp. found that when ceilings were under 5,000 feet, this algorithm agreed with the human observer 78% of the time. With fog, the comparability was 84%, with rain it was 69%, and when snowing 74%. During rain, the NWS Algorithm reported more changes than the human observer.

However at the transition between scattered and broken cloud coverage 4 oktas humans often report too much cloud coverage. This is attributed to the “packing effect;” a condition where an observer does not see the openings in the cloud decks near the horizon due to the viewing angle.   Pilots tend to overestimate the coverage even more than ground observers because of visual compression.

A slight tilting of the ceilometer gives  better performance in rain.

Rain drops tend to flatten as they fall.  See the NASA explanation for this

Consequently, when aligned vertically the backscatter from raindrops may be sufficiently high to cause difficult in resolving the cloud base above the rain.

However when tilted, the backscatter of laser pulses by the raindrops is reduced .

In heavy rain even a tilted ceilometer cannot resolve the cloud base since the integrated backscatter quickly dominates and prevents further penetration up to the cloudbase,  while extinction in the return path also starts to extinguish the return signal..

Please refer to the screen below.

These tests were carried out during light rain.  The tilted unit shows resolvable cloud base while the untilted unit reverts to vertical visibility.

The Cloud Appreciation Society has some great cloud Photos and covers a lot of information about clouds from all over the world.

Here is one of the really good photos .

Cloud Appreciation Society : A classic Cumulonimbus with an arcus feature on the leading edge, spotted near Pipestone, Minnesota, US. © Edward Carberry

Stratus clouds,  irrespective of altitude have a more or less constant and solid base ,  indicating stable layers in the atmosphere and lack of thermal activity.

In the curtain plot below,  the classic rapid change of cloud level characteristic of Cb cloud can be seen between 19.00 and 23.00 hours.  After that time the cloud base solidifies and rises to 6500 ft

There are a great many factors effecting the performance of ceilometers,  but the key 2 issues for any given cloud volume backscatter coefficient  are:

The 8200-CHS has an extremely low level of inherent noise,   which is tested for each ceilometer and is recorded as per the backscatter profile below.

The external source of noise is the shot noise of the scattered and or direct solar radiation within the spectral acceptance of the sensor .   The laser operates around 910 nm and the filtering can only limit the “out of  band”  component of the solar noise spectrum.  The ceilometer will thus t\detect cloud at higher altitudes at night.

There are 2 types of calibration.

Clouds are not solid reflectors,  and the backscatter comes from a range of scatterers inside the cloud,  so the backscattered laser pulse is broadened and flattened.   The height of the cloud is defined as a threshold in the  backscatter profile which has been determined will result in a correct reading for most types of cloud.

2.   Calibrating the ceilometer  constant.    For this ,  there is a clever method as described in a paper by O’connor  et al,  which utilises the known Lidar Ratio of 18.8 in stratocumulus cloud ( SC).

A technique for autocalibration of cloud lidar

The 8200-CHS has the capability of detecting up to 4 simultaneous layers but certain types of standard messages display only 3 layers .

If the lowest layer is optically dense,  the returns from beyond the first  layer are extinguished ,  and the layers above it are not detected until a gap in the lower layer is detected.   If the cloud is not optically dense,  the return from a higher level cloud is not significantly attenuated when passing back through the lower layer,  so both layers can be detected.